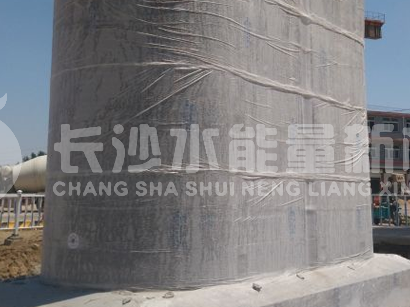 or: road, bridge, pier, culvert, tunnel, crash bearer and such construction structure, side wall of metro and civil construction, bearing column and etc.

The YHM-SL solid series curing film is our new patent product. The high polymer is implanted into the special nonwoven fabric by prepolymerization. The water absorbing crystal, the special nonwoven fabric and the plastic film formed the solid series curing film. The curing film is self-adhesive after absorbing water and the polymer won’t fall. Thus the film can tightly stick to the concrete surface and provide moisture to concrete continuously, and moreover water absorbing amount per square meter of curing film can be adjusted according to curing requirement of the concrete. This series of curing film is specially suitable for vertical side, culvert, bridge pier, tunnel and such structures.